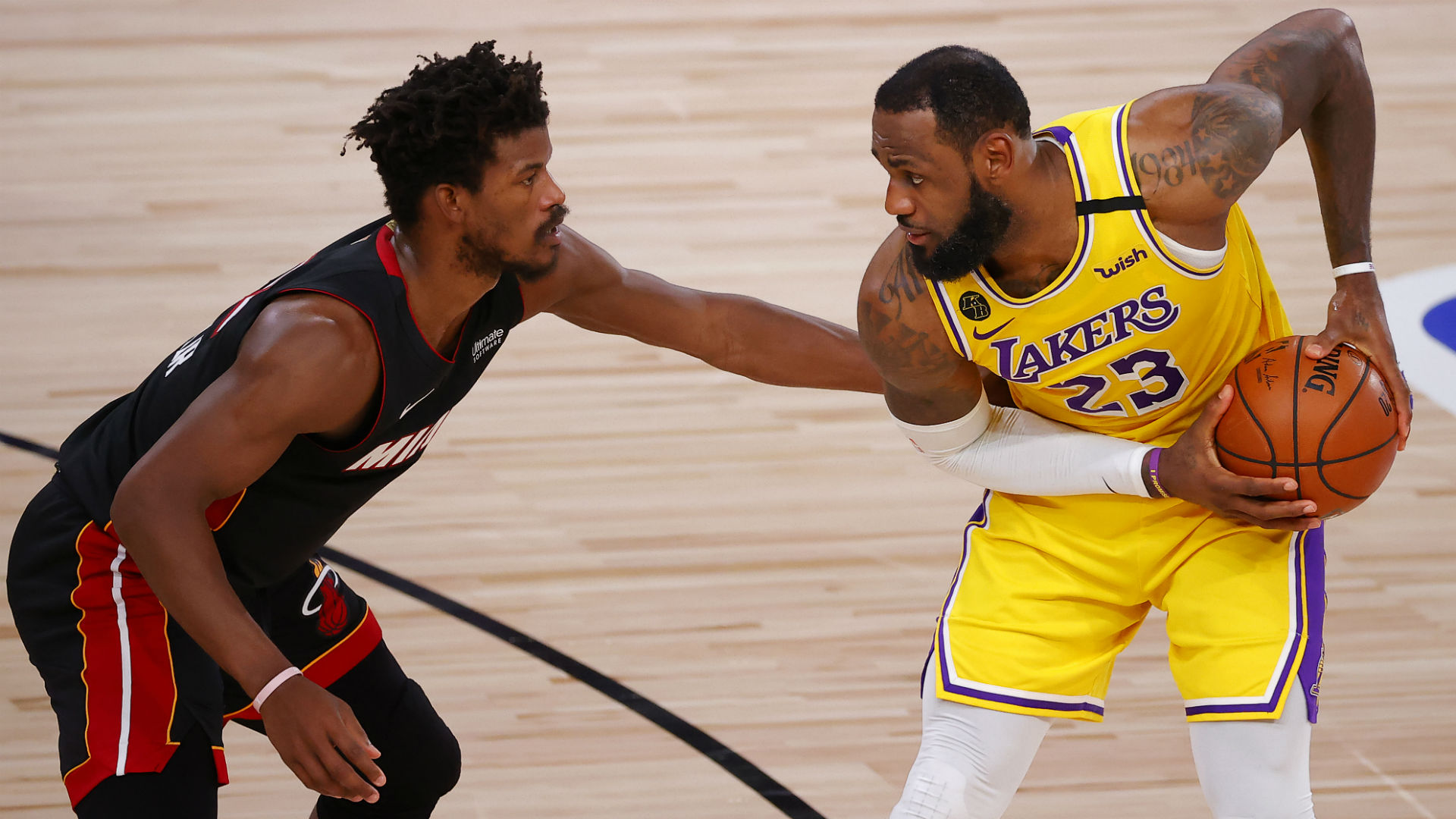 It’s do or die time for Jimmy Butler and the Heat as they face the first elimination game of the 2020 NBA Finals in Friday night’s Game 5.

The Lakers, led by the stellar duo of LeBron James (27.8 points, 11.0 rebounds, 8.5 assists per game in the Finals) and Anthony Davis (25.8 points, 9.8 rebounds, 1.8 blocks), hold a 3-1 lead and have a chance to close out the series after scrapping out a hard-fought Game 4 win, 102-96, on Tuesday. In the closest game of the series, LA found an unlikely hero in Kentavious Caldwell-Pope, who had 15 points and five assists and made a couple of clutch baskets late to seal the victory.

The series might already be over if it wasn’t for Butler’s statistically historic Game 3 performance, in which he posted 40 points, 13 assists and 11 rebounds to lead Miami to a 115-104 win. Any chance of the Heat making a comeback in this series has to start with him, but there’s just one problem: Davis. The Lakers’ big man took the task of guarding Miami’s marquis man, holding him to 22 points on 8-of-17 shooting. Butler attempted just seven free throws in Game 4 compared to the 14 he shot in his 40-point triple-double. So who do the Heat turn to next?

Getting Bam Adebayo back is a big step. The big man returned to the series in the Game 4 loss and contributed 15 points and seven rebounds in 33 minutes. That isn’t a bad night, but it’s far from Adebayo’s best outing we’ve seen this postseason; he posted 32 points and 14 rebounds in Game 6 of the Eastern Conference Finals to clinch the series over the Celtics. If he can generate that kind of offense inside for Miami, he’d likely draw some attention from Davis and free up Butler.

The Heat also need help from their other shooters: Duncan Robinson (30.8 percent from 3-point range in the Finals) and Tyler Herro (32.0 percent) are both shooting below their regular season and postseason averages this series, making things much more difficult for Miami to get consistent offense. If those shots start to fall for the Heat in Game 5, they have a chance of extending the series.

Here is a complete guide to watching Lakers vs. Heat in Game 5 of the NBA Finals, including the start time, how to live stream and a full TV schedule for the series.

What channel is Lakers vs. Heat on?

Game 5 of the NBA Finals between the Lakers and Heat tips off Tuesday night on ABC. There are several streaming options, including WatchESPN and fuboTV, which offers a seven-day free trial.

What time does Lakers vs. Heat start?

Game 5 of the NBA Finals is scheduled to start at 9 p.m. ET on Friday, Oct. 9. As has been the case throughout the playoffs, there will not be any fans in attendance outside of select guests of players.

It’s easy for cable subscribers to stream the NBA Finals by signing into WatchESPN on any device. For everyone else, the process is more complicated.

There are several OTT TV streaming options that carry ABC, including fuboTV, Sling, Hulu, YouTubeTV and AT&T Now. They all require signups through their respective websites. Of those services, fuboTV, Hulu and YouTubeTV offer free-trial options.

Below are links to each live streaming option for Game 5 of Lakers vs. Heat.