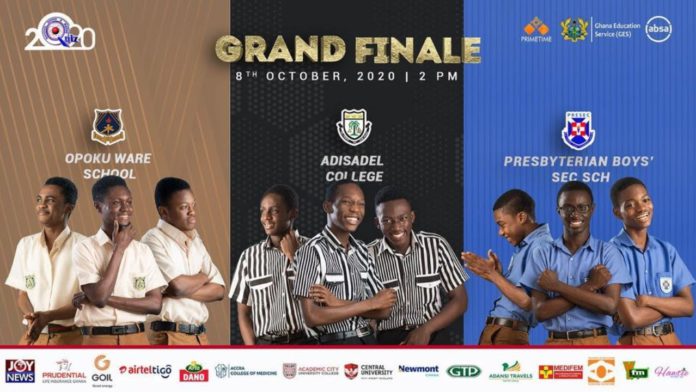 The finalists of the 2020 edition of the National Science and Maths Quiz (NSMQ) have bagged another surprise following the finale of the contest.

Eight students from the three schools; Presec Legon, Opoku Ware and Adisadel College will each benefit from a scholarship for their tertiary education.

This is according to the Executive Director of the Ghana National Petroleum Corporation Foundation (GNPC Foundation), Dr Dominic Kwesi Eduah.

Dr Eduah explained it was targeted at eight of them because one of them would automatically benefit from a scholarship scheme.

“I was told only one among them; the best student among the nine will benefit from a scholarship but I gave the organisers my word to bring the remaining eight to GNPC foundation for a fully-funded scholarship,” he said.

Dr Eduah announced the surprise on Asempa FM’s Sekondi Constituency Watch edition on Friday as he testifies to the students’ excellent performance during the quiz.

“I have engaged my Board and fortunately they have agreed but the school must be a Ghana-based public school. Once they get their admission letters, they should just come to us,” he assured.

After 11 good years and making it to two finals, Presec – Legon won the 2020 NSMQ after beating Kumasi-based Opoku Ware and Cape-Coast-based Adisadel College.

Presec’s dream of taking home a sixth trophy was made possible by their players’ super-sub Isaac Kofi Gyamfi, Benjamin Quansah Nketsia and Gakpetor Daniel Kekeli after a tough competition on Thursday, October 8, 2020.