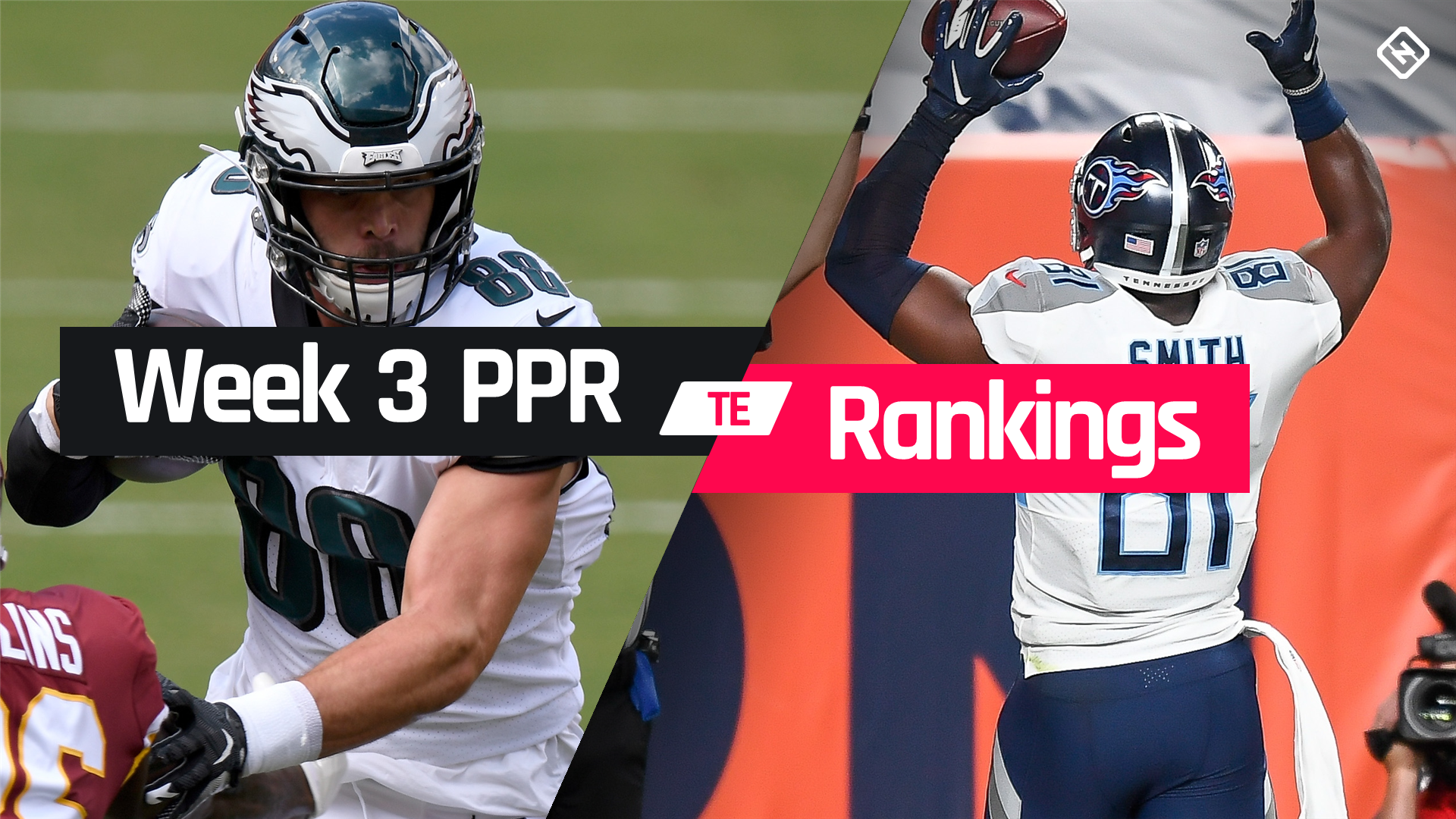 Last week was a surprising one for tight ends, as Dalton Schultz, Logan Thomas, and Drew Sample were all in the top five in targets, and Tyler Higbee, Jonnu Smith, and Jordan Reed — yes, that  Jordan Reed — all caught multiple touchdowns. Other than Higbee, none of those players were particularly high in preseason TE rankings, and even if you liked Smith as a sleeper, you might have drafted him as a backup after a “safer” TE like Zach Ertz or Evan Engram. Hopefully you pivoted off those guys and started Smith last week, but if you need more encouragement, then our Week 3 fantasy TE PPR rankings are here for you.

We’re not being shy about aggressively moving up hot-starting TEs, especially if they look to have favorable matchups. After just two weeks, it’s still tough to know what’s real and what’s an aberration, but there are plenty of trends that look legit, such as Smith’s breakout, Noah Fant’s emergence, T.J. Hockenson’s consistency, and Mike Gesicki’s enhanced role in the Dolphins’ offense. We’re not going to write off Ertz just yet, but Rob Gronkowski might be the definition of “touchdown-or-bust,” which carries even less value in PPR leagues. Austin Hooper also doesn’t look very reliable on his new team, and Eric Ebron appears to be an afterthought (though you know he’ll have a big game when you least expect it). Engram got going a bit in Week 2 but still has issues.

We don’t want to go overboard with our Week 3 rankings, but there really doesn’t appear to be a huge difference between a lot of the TEs mentioned above. Travis Kelce, Mark Andrews and George Kittle, if healthy, still stand out even if they have poor games, but even guys like Hunter Henry and Darren Waller are being challenged by some of these upstarts. They remain slightly more valuable in PPR leagues, but obviously we’ll need to see more yards and touchdowns for them to stay ranked as high as they are.

Ultimately, it’s good for fantasy owners that there seems to be more high-quality TEs, though it makes lineup decisions all the more difficult. That’s where matchups come in, but, again, there’s only so much we know after two weeks. It doesn’t help that TE touchdowns are notoriously fluky.

We’re doing our best to balance all of these factors, but even this early in the season, you shouldn’t be afraid to take a chance. Name value only means so much at this point, so taking a calculated risk with one of this year’s breakouts might be the right move for your team.

We’ll continue to update our tight end PPR rankings to throughout the week, so check back for updates.

These rankings are for full-point PPR leagues