Nikola announced on Monday that founder Trevor Milton will step down with immediate effect as executive chairman following allegations by a short seller that the electric truckmaker’s business was an “intricate fraud”.

Stephen Girsky, a former vice-chairman of General Motors and a Nikola board member, will take over as chairman.

“Nikola is truly in my blood and always will be, and the focus should be on the company and its world-changing mission, not me,” Mr Milton said in a statement. “So I made the difficult decision to approach the board and volunteer to step aside as executive chairman.”

In a letter to employees, he said he would be “cheering from the sidelines”, and that the company was in “amazing hands”.

Despite stepping down as a director and board member, he is still the company’s largest shareholder, with 91.6m shares or a quarter of its stock, worth about $3.3bn at Friday’s closing price of $34.19.

Mr Milton’s decision comes after a tumultuous 10-day period that saw Nikola’s shares halve following a report from short seller Hindenburg Research that claimed to have “extensive evidence” that Nikola’s proprietary technology was purchased from another company.

The report also raised questions about past businesses run by Mr Milton, several of which were mired by lawsuits or had collapsed.

In a letter to employees announcing his departure, Mr Milton wrote that he intended “to defend myself against false allegations levelled against me by outside detractors”.

Mr Girsky thanked Mr Milton for his “visionary leadership and significant contributions to Nikola since its founding” and said Nikola has “world-class partnerships”, including with GM.

As well as Mr Girsky, a well-known industry operator, Nikola is also in the hands of former manufacturing executive Mark Russell, who is its chief executive. 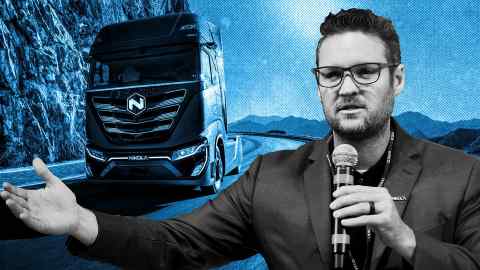 Several Nikola investors previously told the FT they were impressed by Mr Russell, who they saw as a calming balance to Mr Milton.

In a note published on Sunday before the announcement of Mr Milton’s departure, analyst Jeffrey Osborne at Cowen, the financial services group, said it “will take some time for the team to regain credibility with investors”.

He described Mr Milton as “self-confident, boastful and always in ‘sales mode’,” but said the founder was guilty of setting “overly aggressive” targets, rather than “intentional deception”.

In the days that followed the Hindenburg report, several of the allegations were independently verified by the FT, including that Nikola rolled a truck down a hill for a promotional video.

In a detailed defence set out a week ago, the company also confirmed some aspects of the report, including its use of supplier parts.

On Friday the FT reported that Nikola was using Romeo Power, a Californian battery group, to supply the batteries for its prototype trucks.

Following the short seller’s accusations, the US Department of Justice made inquiries into the claims, which Nikola has said are “false and misleading”.